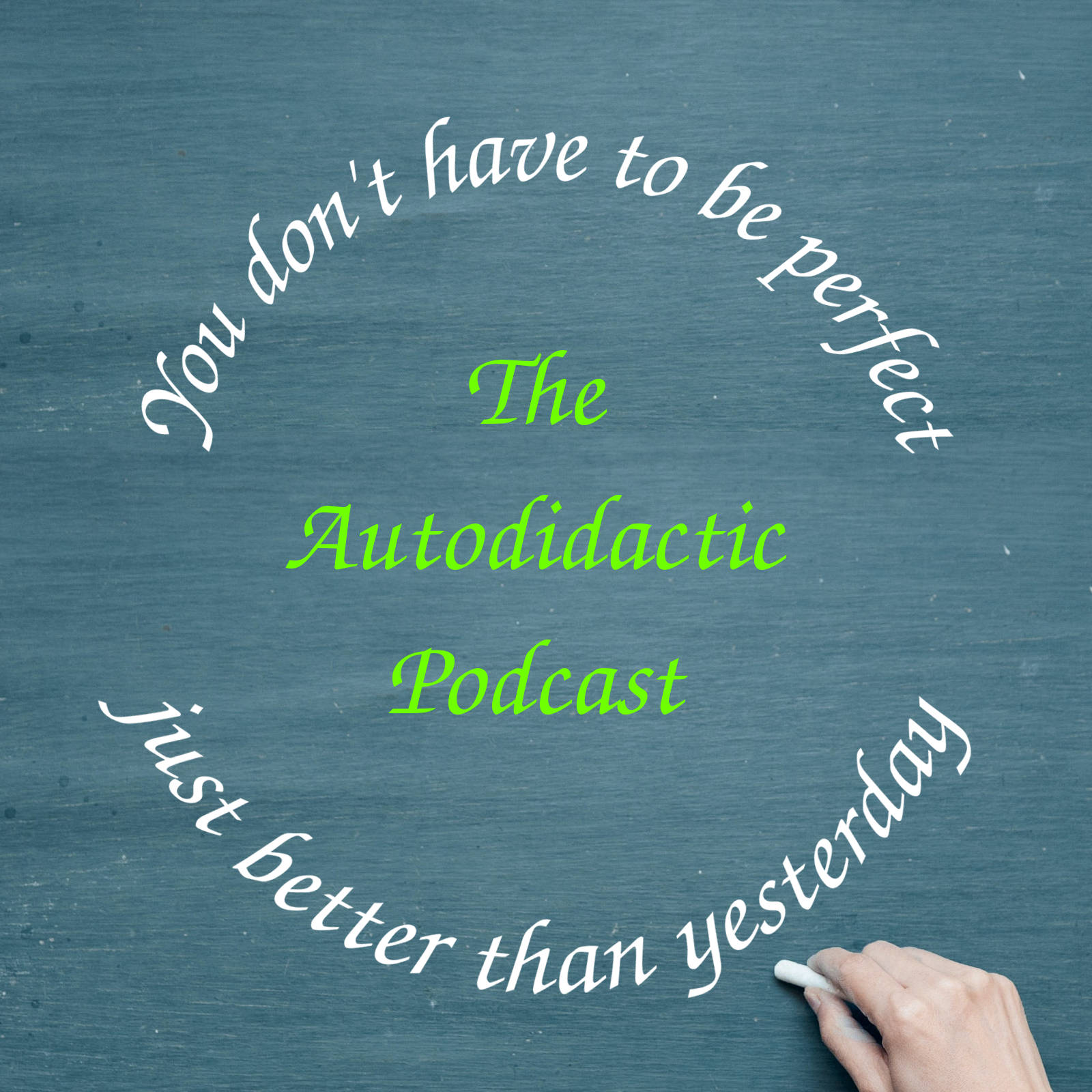 The Autodidactic Podcast
S2E3: Exploring the study methods of a famous American Writer

Hello and welcome to the Autodidactic podcast, season 2 episode 3. I’m happy to say that I’m appearing on another podcast soon. I was interviewed by Kris Brohom from Actual Fluency Podcast about my language learning activities and advice for people studying during the pandemic. I’ll put links in the podcast transcription on the autodidactic.info website.

This episode I’m going to be looking into the study habits of a great writer and autodidactic. Before I tell you his name, let me read a quote from him.

“Libraries raised me. I don’t believe in colleges and universities. I believe in libraries because most students don’t have any money. When I graduated from high school, it was during the Depression and we had no money. I couldn’t go to college, so I went to the library three days a week for 10 years.”

He is one of the most celebrated 20th- and 21st-century American writers, and worked in a variety of genres including fantasy, science fiction, horror, and mystery fiction. I’m speaking of Ray Douglas Bradbury (born August 22, 1920, died June 5, 2012). He was born in in Waukegan, Illinois to Esther Bradbury a Swedish immigrant and Leonard Bradbury who was a telephone lineman.

Bradbury’s most famous works include “Fahrenheit 451” and “Something wicked this way comes.”

Bradbury began writing his stories at age 11 (1931), during the Great Depression—sometimes writing on the only available paper, butcher paper. Bradbury was a firm believer in writing something every day. One incident which Bradbury attributed to his lifelong writing habit was, in 1932, when a carnival entertainer, one Mr. Electrico, touched the young man on the nose with an electrified sword, made his hair stand on end, and shouted, “Live forever!” Bradbury wanted to be immortalised forever through his writing.

Bradbury remarked, “I felt that something strange and wonderful had happened to me because of my encounter with Mr. Electrico … [he] gave me a future … I began to write, full-time. I have written every single day of my life since that day 69 years ago.”

In addition to writing Bradbury was a keen prestidigitator, otherwise known as a magician. As a boy, Bradbury attended several performances by Blackstone the Magician and, in 1931, was given a book on magic for his eleventh birthday. He was soon performing his own magic act for various service clubs and lodges, and was invited to appear at the Veterans of Foreign Wars Hall on Christmas Eve.

In high-school Bradbury was a member of the drama club and was a keen actor. Bradbury married his wife in 1947 and they were married for 56 years until her death in 2003. His wife was the first and only woman he’d ever dated, and they had four daughters. Bradbury never obtained a driver’s license, but relied on public transportation or his bicycle. Bradbury witnessed a fatal car accident when he was 16. Later he said:

“I saw six people die horribly in an accident. I walked home holding on to walls and trees. It took me months to begin to function again. So I don’t drive. But whether I drive or not is irrelevant. The automobile is the most dangerous weapon in our society—cars kill more than wars do.”

Bradbury was a strong supporter of public library systems, raising money to prevent the closure of several libraries in California facing budgetary cuts. He said “libraries raised me”, and shunned colleges and universities, comparing his own lack of funds during the Depression with poor contemporary students. Bradbury permitted the publication of “Fahrenheit 451” in electronic form provided that the publisher, Simon & Schuster, allowed the e-book to be digitally downloaded by any library patron. The title remains the only book in the Simon & Schuster catalogue where this is possible.

It took Bradbury just nine days to write Fahrenheit 451—and he did it in the basement of the UCLA library on a rented typewriter. (The title of his classic novel, by the way, comes from the temperature at which paper burns without being exposed to flame.)

Bradbury remained an enthusiastic playwright all his life, leaving a rich theatrical legacy, as well as literary. Bradbury headed the Pandemonium Theatre Company in Los Angeles for many years and had a five-year relationship with the Fremont Centre Theatre in South Pasadena. Not only was Bradbury highly creative with language—he was also an exceptional visual artist. He would use the basement office as his studio, doodling, sketching, and painting.

He once said that when he died, he planned to have his ashes placed in a Campbell’s Tomato Soup can and planted on Mars. A more fitting memorial is the one NASA gave him when they landed a rover on Mars a few months after Bradbury’s death in 2012: They named the site where Mars Curiosity touched down “Bradbury Landing.”

So what can we take away from Ray Bradbury that would help us as autodidactics? The first is obviously the use of libraries and reading. He was at the library three days a week for 10 years. Even if he spent only an hour or two, he still invested between 520 and 1040 hours of time in the library. But from other statements he made while doing fund raising for libraries we can see that he invested a lot more time than that. He said:

“I read everything in the library. I read everything. I took out 10 books a week so I had a couple of hundred books a year I read, on literature, poetry, plays, and I read all the great short stories, hundreds of them. I graduated from the library when I was 28 years old. That library educated me, not the college.”

So Bradbury in the 10 years he invested time in the library he read about 5200 books. You can see from this quote that he was investing that reading time focused on his primary interest which was writing and theatre. Earl Nightingale said many years ago that one hour per day of study in your chosen field was all it takes. One hour per day of study will put you at the top of your field within three years. Within five years you’ll be a national authority. In seven years, you can be one of the best people in the world at what you do. Bradbury did it for 10 years, and for more than an hour.

As autodidactics much of our primary focus will be on using books for learning. Even if you’re learning a more physical skill such as sailing or painting there are numerous books written by professionals in your area of interest. If you’re interest is more academic then the library shelves are full of things you need.

Where I live the library provides an online catalogue of all their books, not just in my local library, but all the libraries run within the district I live in. They allow me to place an order for any book in any of the 75 libraries under their control and they will deliver it to my local library for me to walk over and pickup. While not every library provides this type of service, it is certainly worth investigating what is available to you via your local library.

Libraries contain not only books for study, but audio and visual works as well. If you’re learning a language then there is a good chance you can pick up some courses at the library with audio included.

Another thing we can take away from Ray Bradbury is the concept of Synergistic Learning. I don’t mean some kind of new-age buzzword. But rather knowledge gained in pursuit of one area, often has application in others. Bradbury introduced a concept of magic or mystery into many of his stories, and used the plays and poems he’d read to help give his writing a more lyrical feel. He applied his writing to a number of areas. In fact Bradbury’s first pay as a writer was for a joke he sold to comedian George Burns.

Being an autodidactic typically means that you’ll be learning more than one topic. These topics of interest can spread over a widely divergent set of things, but can be related. Synergistic learning is simply looking at your various topics of interest and seeing if there is any common ground. If there is you can focus on that area and gain knowledge in two interests not just one. For example, many topics need a good knowledge of maths.

Often we think of self-study as being simply sitting at a desk with a textbook. While that is valid, it isn’t the only thing that should be done. If you’re interested in Nutrition Science. You shouldn’t just be reading textbooks, you should try to also read websites, government guidelines, weight watchers magazines, cooking books, watch YouTube cooking channels, read about agriculture techniques, gardening books, wine and food magazines, etc.

Don’t narrow your focus too much, try to keep an open approach. You can focus when you start to get overwhelmed with information, but having a wider general knowldege of the subject will benefit you when you narrow your focus as well.

Well that is all for this week. If you enjoy the show, please give a rating on the platform you’re using to listen, and please share the podcast with friends and family who might be interested. Also let me know if you find these explorations of the methods used by other autodidactics useful, and if there is someone in particular you’d like me to research. As always you can leave feedback on the website autodidactic.info, or send me an email to rick@autodidactic.info.

Thank you very much for listening.

Welcome fellow self-learners! This is the Autodidactic Podcast website. Here you’ll find links to the shows and all the show notes!